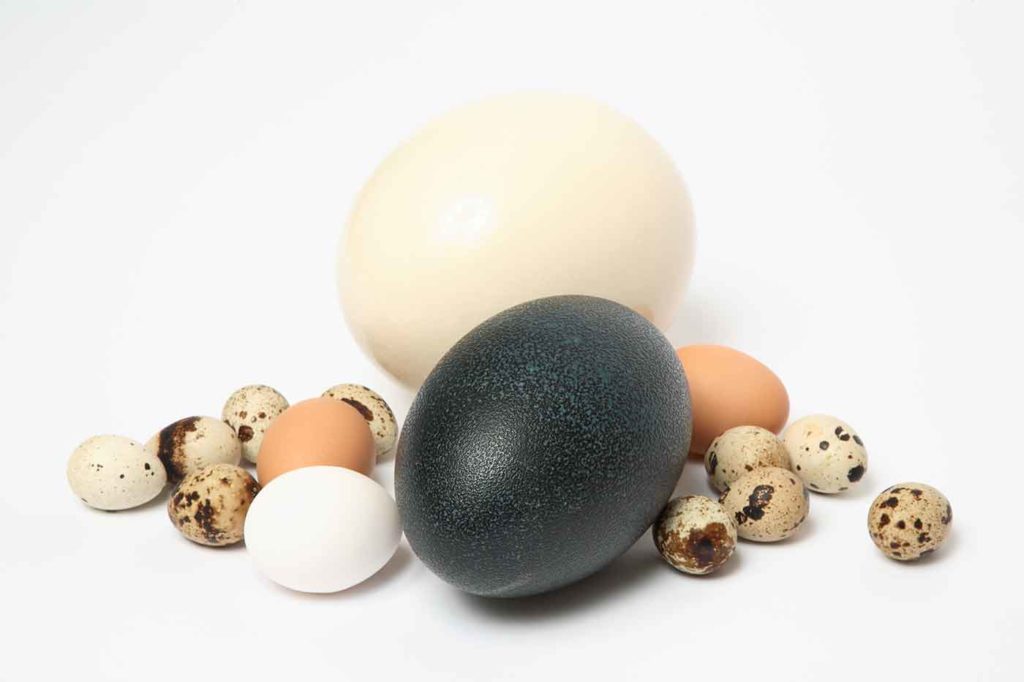 It’s well-known that the UK is home to a wide selection of fantastic fruit and veg. But it’s also home to a variety of British eggs too.

From tiny quail eggs to huge ostrich eggs, we’ve explored the variety of English eggs on offer. Check out our chef’s guide — in size order — below.

Starting with the smallest of the edible British eggs, the quail egg is a well-known favourite in the catering world.

They’re tiny — only about the size of a large olive — with a gorgeous stone coloured shell with speckled brown markings.

When compared with a hen’s egg they have a slightly more intense flavour and a higher proportion of yolk to egg white. This makes them perfect as the central focus of a starter, a simple, yet flavourful canapé, or as a bold-flavoured garnish for a main dish.

First Choice can source quail’s eggs all year round and our British supplier — Cacklebean — provides us exclusive access to their free-range quail eggs.

Pheasant eggs are an exceptional British egg that really deserve more screen time than they get.

Compared to a hen’s egg, they’re about half the size and have a beautiful olive-green shell (with the odd blue or brown one every now and then). Their taste is slightly richer (but not as rich as a duck egg) and they also boast a deep yellow yolk.

These eggs aren’t great for baking. To get the most out of these eggs, soft boil them in their stunning shells and pair simply with celery salt and buttered soldiers.

They’re usually in season March to August each year.

The bantam is a small chicken that lays an egg roughly twice the size of quail egg. The flavour and consistency of the egg is identical to that of a regular sized chicken.

The word ‘bantam’ comes from the Indonesian port town of Bantan. After European sailors docked there for supplies and noticed the much smaller chickens, they took the name back home and referred to small varieties of chickens by the – slightly altered – name, bantam.

Bantam eggs are usually in season from February through to September each year.

Gulls eggs are one of the most exciting eggs on the list. They’re frighteningly scarce, and only around for a few weeks in April and May every year — making them probably the rarest British egg you could add to a fine dining menu.

They come specifically from the black-headed gull. To forage this gull’s eggs, you need a special licence (of which, only a handful of foragers own) and the specialist knowledge of where these birds roost. If you have both then there’s a short window each year where you can search for these delicacies.

Visually, they’re stunning. Their shells are usually green or sometimes brown, with dark speckles all over.

They taste phenomenal too. Garry Eveleigh, forager and author of Wildcook, describes them as “the creamiest, richest flavour imaginable, with a subtle lingering aftertaste”.

Guinea fowl eggs are another fantastic British egg that rarely makes it onto restaurant menus. The guinea fowl itself is a hardy bird that originates from Africa. It was brought into Europe by the Romans but has even spread as far as Jamaica.

Their eggs are smaller than chicken eggs with a very pale brown, almost cream colour. They have a rich flavour and are also very hard shelled and sometimes difficult to break:

The eggs are in season from April through to August.

Of course, if you’re set on sticking to the tried and tested chicken eggs, then we supply these too. And there are some exceptional English eggs available.

Chicken eggs have a milder flavour compared to some of their cousins, which makes them a fabulous allrounder — great for boiling, frying, poaching and baking.

All of our specialist hen’s eggs come from Cacklebean, who produce some of the most exquisite British eggs you can find. Their flagship Arlington White eggs are pure white with rich, golden yolks. But they also supply some fabulous chocolate coloured Maran eggs.

Duck eggs are another well-known variety of British eggs that you can acquire all year round. You’ll know them for their powerfully rich, creamy flavour.

They’re slightly bigger than a chicken egg, both in total size and yolk size. Their light yolks make them perfect for baking, as well as a being a favoured choice for Scotch eggs.

First Choice’s duck eggs are sourced from Watercress Lane, who are one of only two farms in the UK to date stamp their duck eggs. As there is no legal requirement for duck eggs to be date stamped, this is a major bonus for our customers as it makes a big difference with due diligence and food safety.

Most of these eggs come from the peking duck, which produces a white egg all year round. But we can also supply pale blue eggs from the Blue Indian Runner duck, which are available between March and September.

Turkey eggs are another variety of egg that doesn’t get nearly enough limelight. And they’re not just for Christmas!

They’re roughly the same size as a duck egg and have a brilliant white or creamy coloured shell that’s speckled with dark brown spots.

The yolk to white ratio is very high. Their taste is milder than a duck egg, but perhaps a little richer than a hen egg. This makes them a perfect alternative for those that find duck eggs too rich, but still want to use a large egg with a large yolk in their dish. They’re also a favoured egg for baking.

These eggs are generally in season from March to July.

Goose eggs are large — roughly twice the size of a hen’s egg — but with a bold, rich flavour and a particularly firm textured white. This makes them a perfect one egg omelette egg variety, but they’re also delicious scrambled.

Pair them perfectly with some white or black truffles for a suitably lavish dish.

Supply is limited to their season. They’re usually available from late February through to June.

Rhea eggs are cream in colour and the size of 10 hens’ eggs, with a yolk roughly the size of a tennis ball. The flavour is comparable to a chicken egg too.

At this size, we’re heading into the realms of novelty rather than practically. But that can still be a good selling point for your menus. A monster rhea egg omelette or a soft-boiled dipping egg for two are a couple of options that would work; particularly around Easter.

British rhea eggs are in season from March to June.

The second largest of the British eggs on this list is also one of the most striking in appearance. They have a spectacular dark blue/green colouration with tiny lighter speckles.

Each egg is the equivalent to a dozen hens’ eggs. Their superpower is their high yolk to white ratio, which is roughly 50/50. At that size, it makes for a massive yolk!

Emus are a winter laying bird, which means that English emu eggs are typically in season from December to May.

The largest egg from a bird in the world is the ostrich egg. And it is massive!

Most ostrich eggs are the size of two dozen hen’s eggs and weigh a whopping 1.5kg, but one particular world record holder weighed in at a massive 2.589kg.

This combined with the fact that you have to employ some heavy duty tools to get them open, makes the ostrich egg a little more impractical than other eggs on this list. But nothing will quite compare to a show-stopping sharing dish of soft-boiled ostrich egg; particularly around Easter. Boil it to perfection over 50 minutes and serve with celery salt and caviar soldiers to dip.

Ostriches like hot weather and will only lay during warm periods. So their eggs are generally available between April and August each year.

So there’s a dozen fantastic British eggs. To give you a better idea on how they compare in size, check out this video:

How many have you cooked with? We would love to hear how you used them. Tweet us at @FirstChoiceVeg.